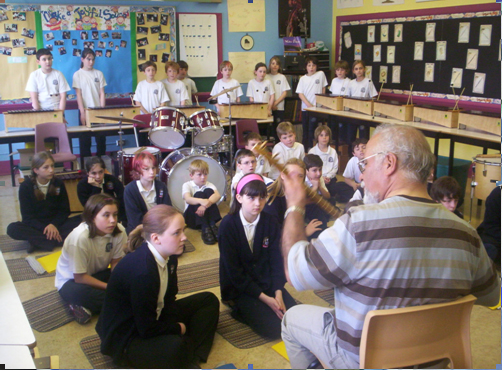 From Orff Method to Chahargah;

Music for the Iranian children

Invited by the faculty of Music in the Memorial University in St. John’s, Newfoundland-Canada, Mehdi Azarsina, Iranian musician, performed an Iranian traditional concert following with a lecture about singing in the Iranian classical music in the “500 Singing Festival” in July 2007. The present article is a report about music for children in Iran and Azarsina’s two newly published books which are becoming the main reference for the music education for the Iranian children. The books compiled on the basis of the Orff method merge the Orff method with Iranian music and culture. Experts in the faculty of Music, Dr. Adams and Dr. Szego in Memorial University, who met Azarsina, comment on the subject.

In 1969, for the first time, the Orff method was introduced in Iran by Dr. Saeed Khadiri who had studied it in Germany. Supported by the Iran Radio and Television Department, he established the Children and Youth’s Music Workshop, where he based the music education on the Orff method.  Then in the Arts department of the University of Tehran, the method was taught to the music students who were, after graduation, distributed all across the country as teachers. After Islamic Revolution in Iran (1978) the Orff method has been again considered for the music education for children, however beside the correct path some misuse and disorder was mixed into it.

Mehdi Azarsina, is one of Dr. Khadiri’s music students. He plays Kamanchè, composes music, has published books and research papers and performed several concerts and lectures. Azarsina, after a couple of years teaching the Orff method in the “Centre for Children and Youth Education”, in 1973 established the Music Workshop in Tabriz city and conducted the Orff classes during the next six years. After many challenging years of music performance, he again considered teaching music for children as a serious career and therefore established a music institute in the capital city Tehran and has recently published his life-experience in teaching music to Iranian children in a two-volume book titled: “From Orff Method to Chahargah”. The books try to conciliate between the western-rooted method of Orff and the Iranian classical music so that to result in a rich source of music education for the Iranian children and youth.

Following is a selective report of an interview that was published in the Mehr-News in May 2007 to publicize the news of publication of Azarsina’s books.

At the time that the Orff method entered Iran how much did it depend on the Iranian Dastgahi[1] music? There was no relation at all. The western method of music education existed beside the traditional Iranian style, however, both were used in the same manner to teach the adults as well as the children. The Orff method could start a better way of teaching the basics of music to the children and then prepare them for learning the Iranian music.

What made you to write these books? Many years of experience in teaching music in all levels from kindergarten to university. However, my intention was not solely to publicize the Orff method; the original form and contents of the Orff method have been deliberately used and leaded toward an introduction to the Iranian classical music; The last song in two-volumes is in the mode of Chahargah, which is a very unique Dastgah in the Iranian music. This path of training also made the name of the book.

How familiar are the Iranian people with the Orff method? Most people have heard the title; especially, it is a familiar name for the parents with younger children. The teacher of the Orff method should be a professional who has studied music and has passed the required courses to train children. But in Iran, assuming that the parents are not that well aware of the Orff method and music education, and also assuming that the children will not realize the quality of teaching, the title of the method is being abused frequently.

How good is the current state in training the teachers for this purpose? Not that great. As I said, not enough serious attention is paid and if there is any, the quantity is not sufficient for the large demand of our young society. Universities and music colleges should include specific courses to train the students for teaching music to children; those students after graduated will have a major role in improving the current state of the music and arts and consequently the wellness of the whole society.

How do you see the effect of your books with respect to the discussed issue?    For parents, school teachers, music teachers and the arts authorities, these books will hopefully make a change in their present understanding of music education for children. The books will also provide a uniform teaching reference in Iran. About three years ago, I had the intention to publish the books with my personal funding, but then it would not be the same publication quality. The present publication quality, with the colorful paintings, will be encouraging for children.

What are the main deficiencies of the music for children in Iran? It is the same situation as of the well-know Iranian expression: “If the first brick is put inclined, the whole building will be inclined!”. At the time I was a child, the adults used to allocate any incomplete and deficient thing (food, toys, tools, etc.) to children, by the assumption that children are easy-going and do not recognize the shortcoming. Nowadays, it is still the same situation for the music education. The kindergarten or schools provide some Flutes, Melodicas, Bells and employ a cheerful jongleur as the teacher, with the assumption that music is not serious and the children will be amused and do not criticize the quality, and then in the formal dinner parties of the institute will perform something; this approach is dangerous and can ruin the culture.

What is the role of the leading departments such as Ministry of Education, Ministry of Culture and the Music Centre regarding the disorder in music education for children? They can ask the experts to find a solution. It has been discussed in the Ministry of Education to assign these two-volume books as the main resource for the music education in the kindergartens, primary and secondary schools. For this purpose the teachers should be university graduates who have passed the required courses in children education. Then for high schools there is already a more advanced choice of studying music which can lead the students to the music school in university. However, a lot of work to improve both the quantity and quality is still needed.

What other methods except than the Orff method exist and how common are they in Iran? The Orff method although is pretty old, still is the most commonly used for children music education world-wide. Another global method is the Suzuki method. But, the most important in an advancing young society as in Iran, is to find an appropriate and adaptable method which can fulfill the youth artistic needs. I believe that it is even possible to teach the very complex “Rāk Keshmir” or “Nasir-khani” Goushès[2] to a six-seven years old child; however, this is wrong and also is not helpful regarding the goals in the music education. Based on the Orff method and its global humanistic values, I have tried to provide a method for music education for the Iranian children that might be helpful for the future of the society.

How about the paintings in your books? Would it be better to put more up-to-date and fashion paintings? Roya Bijani did the paintings; her colorful pictures inspire an imaginative and pleasant atmosphere. And Peymaneh Tehrani, did the graphical design and paging; she was very enthusiastic and even set the color of page number fonts in harmony with the page colors. Our goal was to implement the images so that the children accept and love the books and also to make the children think, laugh and break the habits.

For long, you have been involved in children education; what are your observations in using this method? Children are thirsty to learn; they love to attend these classes and after constantly participating in it, their behaviour turns to more harmony, their creativity sharpens, they learn the group-work and become vivid and lively and also acquire skills in motion and dance. You have to study the books then judge it. Most parts of the books were summarized in trial and practice during my teaching experience and then processed and edited.

And about the words and lyrics? Most of the words and poems in the books were compiled by me. I discussed such a project with many of my poet friends, and eventually realized that it would be a cumbersome task to put another person’s words (which reflect his/her philosophy) on my composed melodies– with very simple tones for children– in a way to express my intended goals and subjects. Hence, I did it myself; in any case, poet’s work is not to adjust the words within a pre-determined subject and rhythm. Using the Orff method, I create many habit-breaking combinations of words and names which as well as stimulating children curiosity and creativity, introduce them the accent and rhythm in music.

Children from grade one to six in separate sessions performed the instrumental and vocal music that was conducted by Ms. ?. Then for each group (grades 1/ 2, 3/ 4, and 5/ 6) one of the lessons in Azarsina’s book was picked, the teacher Ms. ? harmonized the children and assigned each of them an instrument to play, then it was wonderful to hear the Canadian children performing the music which within the global framework of the Orff method, has the Iranian taste. Once even the words were written on the board in Latin alphabet and the children could sing:

At the end, children in the school also listened Azarsina singing and playing Sètar. Music is the language to get united.

A GOOD MOVE IN THE MUSIC EDUCATION

Please write a few paragraphs about how you found the character of Azarsina as an Iranian musician and as a music teacher for children; about the books (I have them if you want to borrow and have a look); about a possible exchange between the more-developed and orderly Canadian (North-American) and more-ancient Iranian music and culture (especially considering the children education); and finally if you would like to add a few lines about the social effects of a positive cultural move (you know Iran is not acting great in human rights and so on, hence if these kind of positive activities are focused on more, it is a progress in human rights etc.).

I am also in touch with Dr. Khadiri (the Orff method introducer in Iran) therefore he may be able to add a brief history and comments.

[2] Goushès are the smaller parts which constitute each Dastgah in the classical Iranian music; see footnote 1. 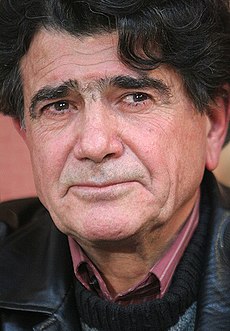 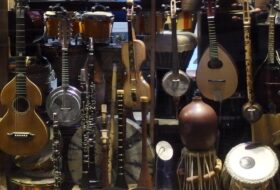 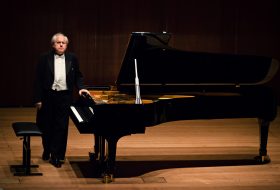 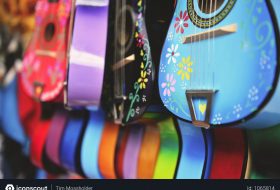 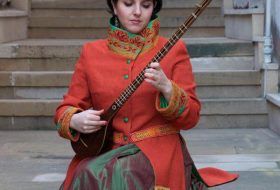 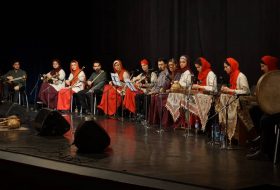 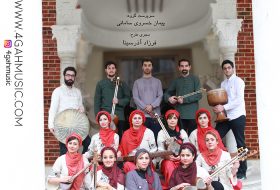 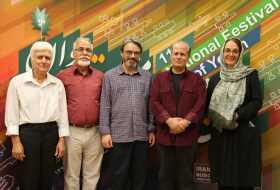 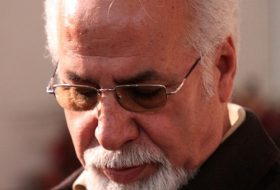